January 30, 2015
It's been a few weeks since I wrote about James Stewart or Alfred Hitchcock, so I thought I'd write about both today.

My post-wisdom teeth doppelgänger and my new favorite actor have made a masterpiece in Vertigo. It plays with your mind in your emotions in the best way possible, keeping you gripped through all 128 minutes. It kills me that it was a box office failure in its day.

Despite being a commercial failure, this film is considered one of the greatest Hitchcock films of all time. I think it may be my new favorite.

A lot of people who watch it now might comment on the fake backdrops used for the scenes where we look down from high places, but I love looking at these old painted backdrops. Even without today's special effects, the audience can still feel the fear that Scottie (James Stewart) feels when he looks down at the view.

My favorite thing about a Hitchcock film is the environment he creates. You're immersed in the story, and every little decision he's made as a director goes toward immersing the audience. I was afraid, excited, creeped out, and enraged at all the right moments while watching Vertigo. A Hitchcock film is an experience.

For me (get ready for a pun), the most instrumental part of creating the feeling of this film is the music. Bernard Herrmann wrote the score for this film and so many of my other favorites, and this one takes the cake. You can listen to the score of this film and feel every emotion you felt while watching it.

Food for thought: North by Northwest, which I wrote about a few weeks ago, starred Cary Grant because Vertigo was a box office failure. James Stewart wanted to play the lead in Hitchcock's next film, but Hitchcock blamed the failure on Stewart looking too old. Because of that, Hitchcock cast Grant in his next feature. Oddly enough, Grant is four years older than Stewart.

Because I feel so badly for Stewart (and this is my new favorite photo), I'll end the post with this: 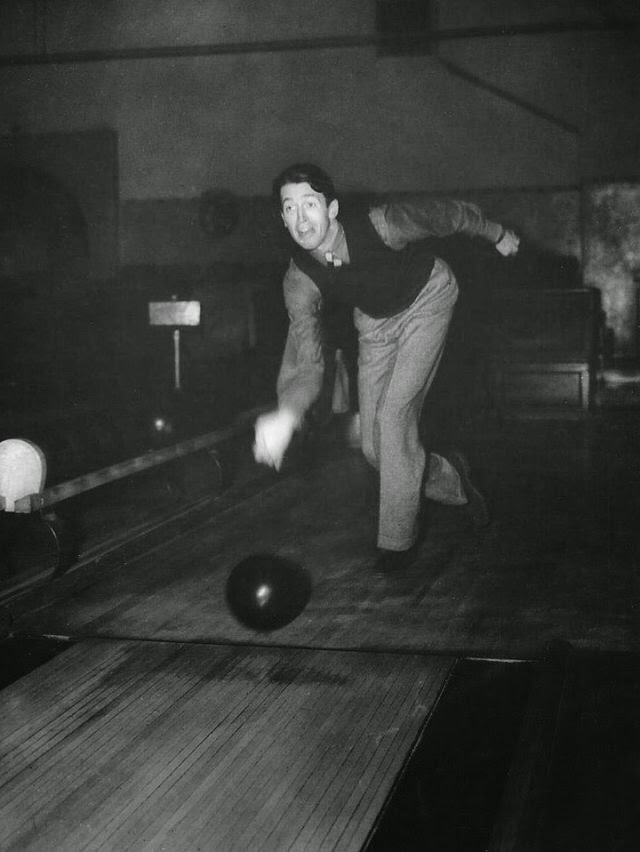 Popular posts from this blog

August 20, 2011
School started a week and a half ago. This year, I'm faced with the typical new things, like classes, work load, schedule, and teachers, but I have also (re)joined the choir and the speech team, and we have a new volleyball coach. While I am excited about all of this new stuff, I can't help feeling like a scared little freshman, not knowing what to do at all and diving into whatever I can while screaming bloody murder. The start of school makes everyone feel really scared, agitated, depressed, or all of the above, I think, and I am most certainly no exception. I have been very mopey and angry and screamy and cry-y lately, and I have definitely been taking refuge in God, music, coffee, and exercise now more than anything. While I sit here, once again stressed and not helping myself by procrastinating and writing a blog post, I just wonder if I'm the only one who feels this way about a little thing like school. I'm sure I'm not, because there are billions of people ou
2 comments
Read more

January 07, 2012
We've all got problems. We don't have good grades, our car broke down, we don't have enough friends on Facebook or Twitter or blog followers, we ate too much, we're starving, we don't know when our favorite TV show comes back on, we're missing a party or a big game for something really boring, our job sucks, etc. No matter how trivial these problems seem to other people (or your future self looking back on where you are now), they are tough and matter to us. They are real problems. That is, until something real happens. Something worthy of at least three episodes on a major TV show. A lot of times when something like this happens, we are in shock, not even able to comprehend what has just happened. Then, we have to go through our day, scared and numb. But finally, you get that moment when you can calm down. That may mean you have to clean, make a mess, scream in a pillow, talk to yourself, pray, talk to your neighbor's cat, read, write, watch your favorite
Post a Comment
Read more

March 29, 2016
Believe me when I say that it pained me to type out the title to this post. Cameron Crowe is one of my very favorite filmmakers. To me, a guy who can write teenagers who are real people, really capture the full spectrum of human emotion, and incorporate a great soundtrack into his work is a real genius. Though it initially made me feel warm, fuzzy, and hopeful, a recent late night viewing of 2005's Elizabethtown  ended up making me a little nervous. I realized that Crowe was just like everybody else. Now, this probably doesn't make sense to those of you who admire his work. As a writer and filmmaker, Crowe definitely has a unique voice and vision that helps his work connect with all kinds of audiences. That's precisely the problem. Last week I wrote a post about how movies are only a reflection of life and not actually true to life itself. In the post, I mentioned that filmmakers are just one person with one perspective, and that is absolutely true of Crowe. In Crow
1 comment
Read more